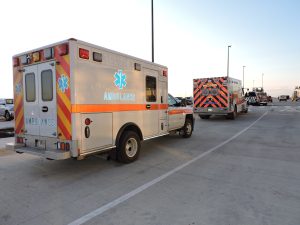 The 1% Public Safety Sales Tax (1% PSST) provides a supplemental revenue source to public safety agencies for operational and capital costs and for expanding behavioral health. It was voted in by the public in November 2014 for a period of 10 years: April 1, 2015 through March 31, 2025. Revenue from the tax is split 50/50 between Williams County and the City of Williston. 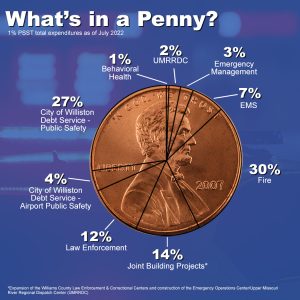 A total of 18 public safety agencies serve more than 40,000 people living and working in 2,148 square miles of Williams County.

How has revenue from the 1% PSST been invested in public safety?

The City of Williston utilizes their net proceeds to pay down bond debt incurred prior to the tax implementation to cover capital and operational costs for the Williston Fire Department & EMS, the Williston Police Department, and for dispatch services through the UMRRDC. Specific expenditures include:

Future of the 1% PSST

On the November 8, 2022 General Election ballot, voters will be given the choice of whether or not to renew the 1% PSST for an additional 10 year period. Everyone, including visitors, temporary workers, and industry, contribute to revenue generation of a sales tax. With the growing population and increase of industrial activity, first responders are busier than ever. Costs to efficiently operate and equip public safety agencies have also increased. A renewal of the tax will continue to be a supplemental source of revenue for the 18 public safety agencies and Williams County will also use a portion of their share for enhancing behavioral health across the County.

• Population growth: The population of Williams County has nearly doubled since 2010 and future growth is projected as new industries develop across the county – this increases the population to be serviced.
• Industry growth: After experiencing downturns in the oil industry in 2016 and again in 2020, the industry is rebounding with activity and new industries have their eye on Williams County, thereby also increasing the demand on emergency services.
• Costs: The cost of operating a reliable public safety agency, as well as the cost of equipment, has significantly increased over the years.
• Projected income: By March 2025 when the initial sales tax sunsets, the projected revenue will be approximately $80 million less than originally projected for the 10-year collection period.

The 1% PSST is currently used as supplemental funding because many rural fire and ambulance districts are levying the maximum amount allowable, and districts that do not levy (e.g. the city they are associated with levies on their behalf) want to keep their property tax levy at a reasonable rate.

For perspective, the approximate cost of a standard new fire truck (pumper) is about $500,000; a fully-equipped truck can be upwards of $800,000. The average maximum annual property tax levy for a rural Fire District is about $207,000.

Without the 1% PSST, property tax, or unguaranteed revenue like grants, will have to be more heavily relied on to meet operational and capital needs.