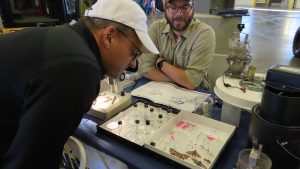 Mosquitoes are so bad this year! Why?

There is a very direct relationship between the amount of standing water the number of mosquitoes we have during the year. The more rainfall and flooding the more likely it will be a bad year. There are exceptions, but they are not very common.

I never see Vector Control out and about. Are you even treating this year?

Adulticide treatments occur near sunset when mosquitoes are most active and sprays can be the most effective. In the summertime that can mean 10 pm or later. Depending on the application method you may or may not even hear or see the vehicle. Aerial applications are conducted with either a helicopter (rural areas) or airplane (urban areas) and have a swath width of 1,000 feet. The aircraft may not even fly over your property, but you are being treated. Ground vehicles drive past your property going 10-15 mph and avoid doubling back on themselves.

Larvicide treatments occur throughout spring, summer and fall, but typically occur in unpopulated areas, so those are also not very visible. Larvicide treatments also occur via air and ground. Aerial applications often take place just after dawn or before sunset when weather is calm. Ground applications often use residual products that are effective for 3 to 4 weeks, so even if an area is wet, it likely has already been treated.

Larvicides are much more effective than adulticides for two major reasons:

Adulticides are less specific to mosquitoes, are susceptible to weather conditions, and necessitate that an adult mosquito must encounter a spray droplet. Mosquito adulticides offer no residual activity and are quickly rendered inert when exposed to sunlight. However, both components are part of an integrated vector control program and accomplish very different tasks.

Read more about treatments on our Types of Vector Control webpage.

Why doesn’t the Air Force Reserve spray every year?

Vector control treatments conducted by the U.S. Air Force Reserve (USAFR) are only a request. The USAFR has the ability cancel or change their plans with little prior notice. Spray requests are scheduled 2 years in advance. This makes targeting their arrival date very difficult. Some years all the pieces come together and others it does not. Additionally, there are several state and federal regulations that must be addressed before they are able to spray, and when the regulatory landscape changes, USAFR sprays may be canceled. Williston Vector Control actively works with the USAFR to anticipate these changes, but it can take months before a resolution is found.

The USAFR only sprays a small proportion of the total annual spray acreages that the Williston Vector Control District does. The rest is treated through an aerial contractor using much smaller and more versatile aircraft.

How do you keep track of the mosquito population?

We operate a variety of mosquito traps that are dispersed throughout the county and its municipalities. We collect these traps on a daily basis, excluding weekends and holidays. Traps are counted and the numbers of individual species are recorded. Pools of mosquitoes are then tested for the presence of harmful diseases like West Nile virus.

How do you respond to vector borne diseases?

Guidelines | The Williston Vector Control District (WVCD) follows the most current guidelines from both the Centers for Disease Control (CDC) and the North Dakota Department of Health (NDDoH) when responding to the detection of a vector borne disease like West Nile Virus.

Risk Assessment | WVCD uses a risk assessment calculator provided by a software program called VectorSurv. This calculator is adapted from the CDC and is used as a general guide for assessing the overall risk of an area. There are five surveillance categories where risk ranges from 1 (lowest risk) to 5 (highest risk). These categories and risk levels provide a general guide for district operations. Three of the 5 risk assessment categories are used: Environment, Abundance, and Infection. The other two, Seroconversion and Dead Bird Infections, are not used by WVCD. These three are averaged to provide an overall risk. Additional details can be found on the VectoSurv website.

Mosquito Surveillance | WVCD performs routine mosquito surveillance within the district using a network of mosquito traps. These traps are spread throughout the district and are designed to attract and catch various species of adult mosquito. Some of the traps are collected daily (excluding weekends/holidays) while others are placed during specific times and dates to focus on problem areas. A special type of trap is used when looking for mosquitoes that could be carrying a disease, such as West Nile Virus. These traps are designed to collect adult mosquitoes without killing them. Once the traps are emptied, the mosquitoes are quickly frozen and used for disease testing.

Testing | WVCD uses a process called Polymerase Chain Reaction (PCR) to test mosquitoes for West Nile Virus (WNV), Saint Louis Encephalomyelitis virus (SLE), and Western Equine Encephalomyelitis virus (WEE). The use of PCR allows the district to quickly test for these diseases and to develop an appropriate action plan to mitigate the spread of these diseases to humans. If any of these viruses are detected in a mosquito pool, the district notifies the NDDoH, the local emergency rooms, and schedules a spray event for the area surrounding the collection site. This area will continue to be monitored until no virus is detected, after which normal surveillance resumes.

Action Thresholds | In addition to disease surveillance, WVCD also manages nuisance mosquitoes common to the area. A set of action thresholds are defined for different classes of mosquito (nuisance VS disease vector). Once a threshold is reached, operations to manage the adult mosquito populations are initiated. An increase in the chance of disease transmission is not the only threshold used for increasing mosquito control activities. These include both aerial and ground sprays using an Ultra-Low Volume (ULV) application of a pesticide.

How can I help to reduce the mosquito population in my own yard?

One of the most effective things you can do is to remove any standing water you may have on your property. This can be flower pots that hold water, baby pools, or old tires you have laying around. Source reduction is the best way to combat mosquitoes!

Is there a way to let you know that mosquitoes are bad in my area?

If you have noticed an increase in the mosquito population in your area, you can submit a Vector Control Service Request. Service Requests help us to find unknown mosquito development sites and pinpoint problematic areas.